Technically, what we call NATO straps are usually made to conform to UK’s Ministry of Defense (MOD) Std. 66-47 milspec requirements (I’m not sure there’s a NATO milspec), and ZULU is a trademarked name of Maratac, a US company (they appear to be moving to enforce their claims and prevent others from using the name). There are copies of the two styles from many sources.

The ZULU appears to be based on the strap originally made by RHINO, from Australia. There are many makers of the ZULU-style strap besides Maratac. There is at least one “official” MOD strap maker in the UK, but even their public releases have variations.

The NATO/MOD design permits a strap to be used over or under clothing (flight suit, wetsuit, etc.) because of the extra length, and usually moves the buckle away from the underside of the wrist, allegedly to prevent catching of the buckle on clothing or weapons. But it results in a very large triple layer of nylon on the outside of the wrist.

The design also means that if one spring bar breaks, the watch will still be attached to the other, and not fall off the strap, which remains on the wrist. 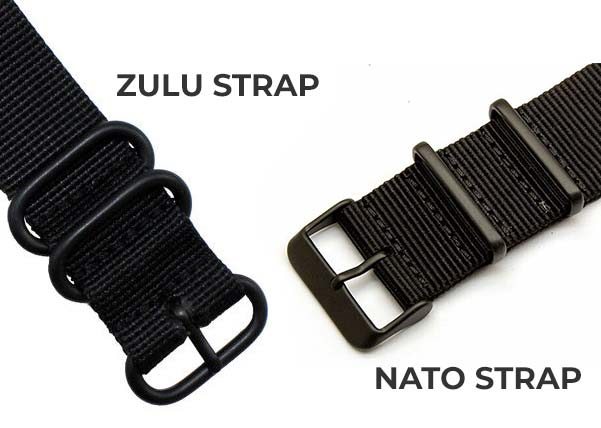 Read on if you want the nitty gritty!

Generally, the NATO-style has a thinner nylon strap than the ZULU. The MOD requirements call for the extra nylon section, with two metal hoops after the buckle, and one on the other side (a total of three plus buckle). The RAF version omits the extra section and two of the hoops, keeping only the one that serves as a keeper. The metal hoops are thin and rectangular in shape. On some, the buckle/tang is attached by a spring bar and is removable, but on most, it’s stitched in. Hardware ranges from plated brass to stainless, and can be polished, brushed, bead-blasted, or PVD finished. The nylon is usually flat and tightly woven, but on the “tropical” versions the nylon wave is open and loose, without added holes for the tang. And there are leather versions, too.

The ZULU comes in several variants. All have more robust metal hardware than the NATO style straps, and are made of thicker nylon. The heavy-duty hoops and buckle are stitched in, and are oval in shape. There are four-hoop & buckle models (like the NATO, with an extra strap section, but with an added keeper hoop, often called “five hoop” straps); two-hoop & buckle models (like the RAF style, but with two keepers); extra-long diver versions; and two-piece versions that have a buckle and two keepers, and which have two separate nylon parts that attach via spring bars to the case, like a traditional leather strap. Maratac’s hardware (and many makers’ hardware) is available in brushed and PVD-black versions; there is one source I know of for bead-blasted hardware on ZULU-style straps (that’s Wiegand/Lum-Tec, in Ohio; their straps are shorter than the usual length).

The nylon pieces on NATO-style and ZULU-style straps can be stitched, welded, or welded and stitched. The holes can be punched, melted, or ultrasonically welded.

The one-piece and two-separate-pieces straps permit the buckle to go under the wrist, in the “normal” position. The other versions put the buckle on the outer edge of the wrist, which some like and some don’t like. Any extra nylon is usually folded up and inserted within the keepers, between the two layers of nylon, or outside of the second layer of nylon.

Will my watch work with a NATO strap?

Check out our simple compatibility guide to see if your watch is supported.

Christmas Deadlines: Play it safe - order before 11am Tuesday 14th of December!

The inspiration behind Frogsquadstraps evolved from my many years of military service, using and modifying Milspec gear for variety of applications. The Frogsquad strap is handcrafted and hand stitched using authentic Milspec webbing and hardware. 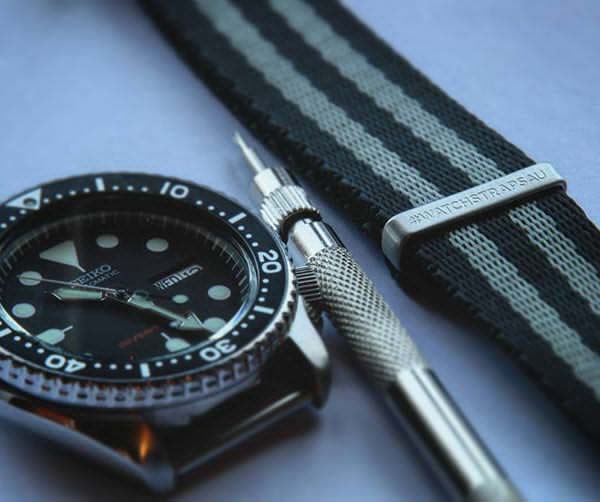